We are moved by the five panelists' personal stories of courage, persistence and triumph. They fill us with admiration and give us optimism for the future. Thank you to Anna Duckworth for moderating this event. 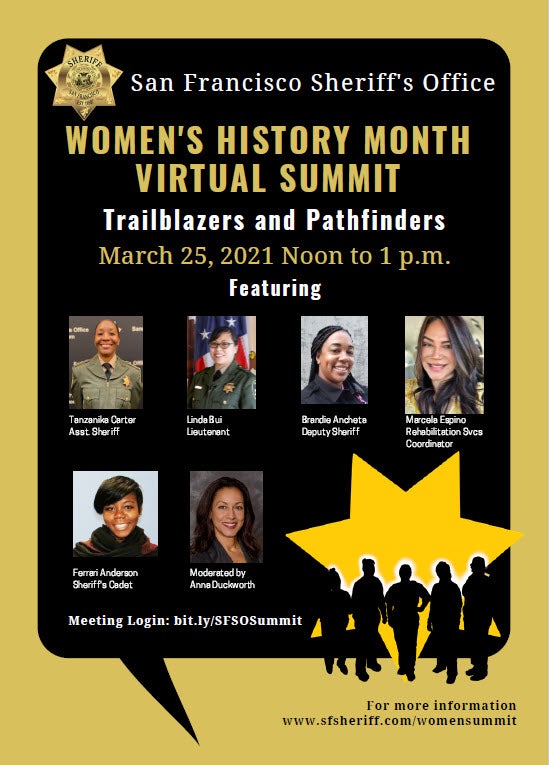 Tanzanika Carter is the Assistant Sheriff for the San Francisco Sheriff's Office (SFSO) with over 25 years of law enforcement experience. She believes in 21st Century policing and advocates for procedural and equitable justice in the administration of justice.

Prior to joining SFSO, Assistant Sheriff Carter served 21 years with the Bay Area Rapid Transit District (BART) Police Department promoting to the rank of Lieutenant and overseeing more than 50 staff in the Contra Costa County area.

In 2019, Ms. Bui became a Lieutenant. She worked at County Jail #2 for many years before joining the Sheriff’s Information Technology unit where she leads a team responsible for maintaining the Sheriff’s Office computer network, providing technical support to staff and responding to and analyzing data requests.

Brandie Ancheta joined the Sheriff’s Office in 2002 as a Sheriff's Cadet, a non-sworn position which provides exposure to career opportunities in the department. Three years later, she became a Deputy Sheriff after completing rigorous basic police academy training, CORE classes and jail operations course over a nine-month period.

Dep. Ancheta worked at County Jail #2 and currently serves as a Jail Training Officer at the Intake and Release Center. Along the way, the San Francisco native earned bachelor’s and master’s degrees, got married and became a mother to four children. Her passion is inspiring other women to embrace every opportunity. Dep. Ancheta prides herself on fulfilling multiple roles: devoted wife and mother and successful career woman.

Marcela Espino Hernandez directs, plans and organizes programs for justice-involved people in custody. She joined the department in 2008, coordinating the jail-based Sisters in Sober Treatment Empowered by Recovery (SISTER) program.  Ms. Hernandez currently oversees support services for the incarcerated population at County Jail #2 during the pandemic.

She shares her passion for wellness, teaching incarcerated women and “anyone who is willing to invest in their health,” promoting physical activity as medicine for the mind and body.

A native of San Francisco, she worked at Wells Fargo Bank for four years prior to becoming a Cadet.