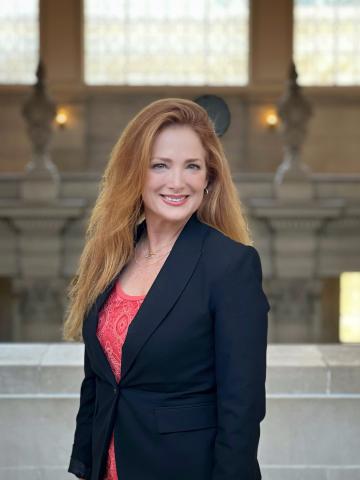 Moriarty previously worked for the San Francisco International Airport, where she served as Communications Manager for three years. Before that, she was the Director of Communications for Mayor London Breed’s election campaign. You may know her best, however, from her 10-year stint as a KTVU Channel 2 Reporter/Anchor, where she covered everything from fires and floods to mass shootings and San Francisco politics. When she wasn’t doing a live shot on breaking news, she could be seen entering City Hall or the Hall of Justice.

Moriarty moved several times throughout her childhood and has lived in places such as Chicago, New York, and Puerto Rico, where she learned Spanish. She earned her Bachelor’s degree from UCLA and her Master’s in broadcast journalism from the University of Missouri-Columbia.

She is married with three children. In her spare time, Moriarty enjoys singing karaoke, baking chocolate chip cookies, and taking walks on the beach with her Golden Retriever, Noe.