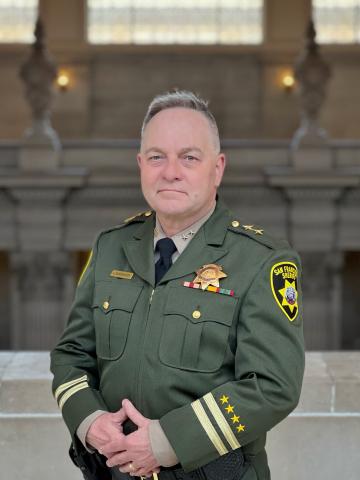 Chief Deputy Kevin Thaddeus Fisher-Paulson joined the San Francisco Sheriff's Office on October 3, 1994, and has served at every rank and in every division. Sheriff Vicki Hennessy promoted him to Chief Deputy Sheriff on February 24, 2018, where he oversaw the Administration & Programs Division.

Chief Deputy Fisher-Paulson's collateral duties have included command of the Honor Guard, as well as chairmanship of the Policy & Procedure Committee and the Visiting Committee. In 1998, he helped the Sheriff’s Office create a Peer Support Unit and has served as president for the California Peer Support Association. He is a graduate of the Sherman Block Supervisory Leadership Institute.

Chief Deputy Fisher-Paulson lives with his husband, two sons, and rescue dogs in San Francisco, and writes a weekly column for the San Francisco Chronicle that appears on Wednesdays.