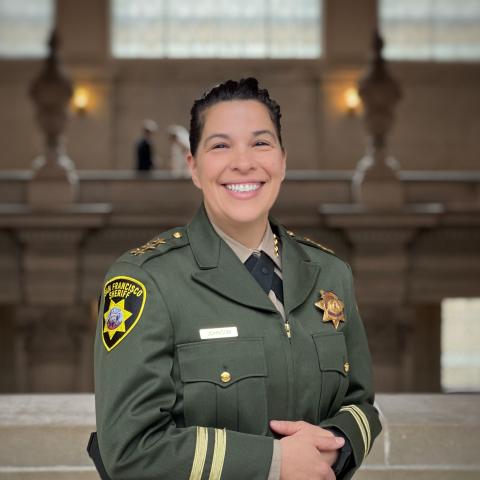 Undersheriff Katherine Johnson, who promoted to her current position in September 2022, joined the San Francisco Sheriff's Office in March 1996. She worked in the Intake and Release Center, County Jails #2 and #4, and the now-shuttered County Jail #3. She also served in the Classification and Personnel Units, and in key executive positions for multiple Sheriff administrations including Assistant Sheriff, Chief Deputy, Chief of Staff, Budget Officer, and Media Relations.

She is the Sheriff Office’s “Buffin” lead and subject matter expert, having worked with the Office of the City Attorney in San Francisco and local law enforcement agencies to develop new release procedures that replaced the Superior Court’s pre-arraignment bail schedule. A September 2019 federal court judgment, known as the Buffin court case, ruled that the court’s prearraignment bail schedule was unconstitutional.

On June 27, 2020, Sheriff Miyamoto appointed Johnson to serve as Chief Deputy of the Planning and Projects Division.

Chief Deputy Johnson has taught both Advanced Officer and CORE training for many years. A native San Franciscan, she graduated from Abraham Lincoln High School in the Sunset district and earned her undergraduate degree later in life from Union Institute and University.

The proud daughter of Greek immigrants, Chief Deputy Johnson is bilingual and enjoys cooking and the outdoors.