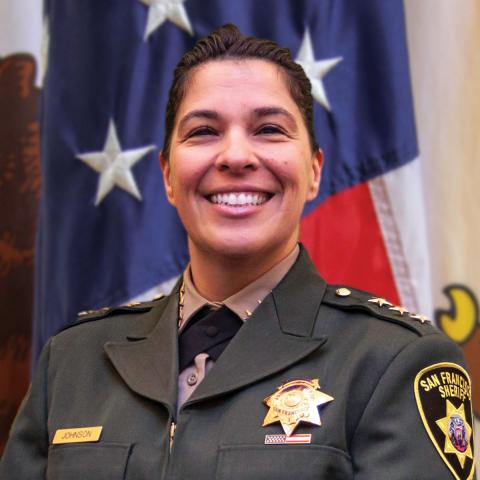 Assistant Sheriff Katherine Johnson joined the San Francisco Sheriff's Office in March 1996. She worked in the Intake and Release Center, County Jails #2 and #4, and the now-shuttered County Jail #3. She also served in the Classification and Personnel Units, and in key executive positions for previous Sheriff administrations including Budget Officer, Media Relations and Chief of Staff.

As Chief of Administration and Programs, she helped collaborate on a grant to fund the Misdemeanor Behavioral Health Court, which provides treatment and alternatives to incarceration to arrestees with serious mental illness.

She also played a leading role in the development of groundbreaking transgender, gender variant and non-binary (TGN) policy and procedures for the Sheriff’s Office.

Assistant Sheriff Johnson is a leader and subject expert in the Sheriff’s Office implementation of the Buffin judgment. Working with the Office of the City Attorney in San Francisco and local law enforcement agencies, she has helped develop procedures to replace the pre-arraignment bail schedule for arrestees’ jail release.

Assistant Sheriff Johnson has taught both Advanced Officer and CORE training for many years. A native San Franciscan, she graduated from Abraham Lincoln High School in the Sunset district and earned her undergraduate degree later in life from Union Institute and University.

The proud daughter of Greek immigrants, Assistant Sheriff Johnson is bilingual and enjoys cooking and the outdoors.