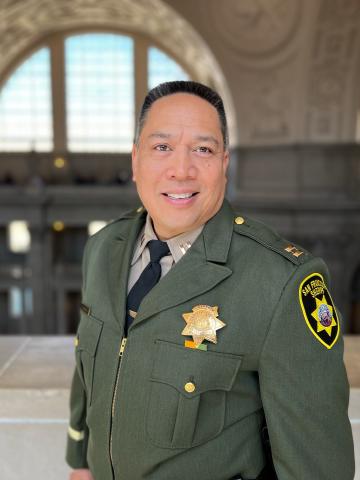 James Quanico joined the San Francisco Sheriff’s Office (SFSO) in September 1996. A native San Franciscan, Quanico wanted to serve his community as a peace officer. He rose through the ranks, from Senior Deputy (2000) to Sergeant (2008) and Lieutenant (2016), and attended the Sherman Block Supervisory Leadership Institute in 2010.

Sheriff Paul Miyamoto promoted Quanico to Captain on March 7, 2020, where he serves as the Commander of the Intake and Release Center and the Central Records and Warrants Unit (CRW).

Captain Quanico has worked at County Jails #2, 3 and 7, the Classification Unit, Investigative Services Unit (Internal Affairs), and as an Executive Officer to Undersheriffs Federico Rocha and Carl Koehler, and then-Chief Deputy Katherine Johnson. He most recently supervised the Central Records and Warrants Unit.

Captain Quanico has been an active volunteer in his community for 30 years, coaching youth basketball, baseball, and Pop Warner football. He also served as the head varsity women’s basketball coach at Westmoor High School in Daly City.