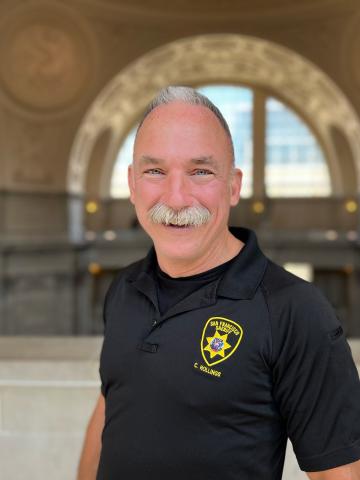 Before joining the Sheriff’s Office, Hollings worked for the San Francisco Public Utilities Commission as Director of Financial Planning, where he set rates for water, sewer and public power.

His interest in public service and criminal justice policy led him to join the Sheriff’s Office, where he has gained a deeper understanding of the multiple groups and issues that comprise San Francisco’s criminal justice system.

Hollings graduated from the Aircraft Maintenance Division of City College of San Francisco. He repaired jet engines for United Airlines in San Francisco and before that, Airbus Industrie in Toulouse, France. He later earned his MBA from UC Berkeley, switched careers and joined the San Francisco Public Utilities Commission.

Hollings is active in the community and serves on several boards, including the Alice B. Toklas LGBT Democratic Club, and the Castro Community Club, a sober community space. He also teaches country-western dancing and is an avid runner with a goal of six half-marathons a year. He volunteers as a City Hall docent. Hollings lives in San Francisco’s Castro district with his husband, Luis.