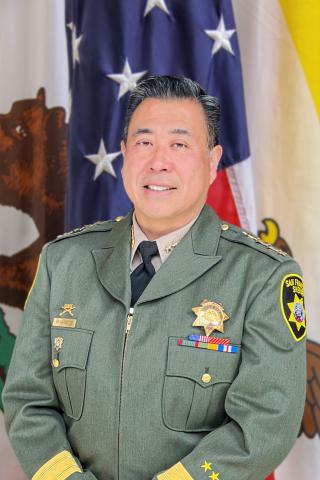 When Paul Miyamoto was sworn in as San Francisco’s 37th Sheriff on January 8, 2020, he thought he’d seen everything. He hadn’t seen COVID-19.

A few weeks later, the newly-minted Sheriff was staring down the barrel of a global pandemic, assessing novel, invisible threats to public safety and Sheriff operations.

At Sheriff Miyamoto’s command, the department sprang into action during the month of February, developing a plan for all four divisions to keep everyone safe from the threat of a deadly virus.

Sheriff Miyamoto was especially concerned about the justice-involved population under his care and custody. Jail and prison populations living in congregate settings are at increased risk of contracting COVID, often with deadly consequences.

He also recognized the twin challenge to mental health that COVID posed, as people in jail suffered from being separated from family, friends and loved ones.

In August, Sheriff Miyamoto announced that all phone calls from jail would be free, the first county in the nation to do so. At his direction, Sheriff’s Office staff also stood up video visits in the jail where no Internet infrastructure existed before.

Throughout the pandemic, the Sheriff has worked with the City’s justice partners to safely lower the jail count and reduce the risk of COVID among the most medically vulnerable custodies. To date, there have been no COVID outbreaks, hospitalizations or deaths in San Francisco county jail.

With a reduced jail population, Sheriff Miyamoto closed the seismically unsafe County Jail #4 at the Hall of Justice in September -- two months ahead of schedule.

The Sheriff's resilience and vision in the face of adversity is part of his family legacy. His late father, Phil Miyamoto, and extended family, survived and triumphed after being forcibly relocated to a Japanese internment camp during World War II. Sheriff Miyamoto credits his own success to the values his family instilled in him, which were born in part from this experience.

When he was sworn in on January 8, 2020, Sheriff Miyamoto also became the first Asian American Sheriff in San Francisco history. Born and raised in the City, he now leads one of the nation’s most diverse and inclusive Sheriff’s Office workforces.

Sheriff Miyamoto serves on the boards of the National Association of Asian American Professionals in San Francisco (NAAAPSF), which mentors individuals to become leaders in their professions; and Guardians of the City, which preserves and promotes the history of San Francisco public safety.

Sheriff Miyamoto attended Lowell High School in San Francisco and graduated from the University of California, Davis in 1989. Married to LeeAnn and a father of five including triplets, he also coaches his children's youth basketball teams.