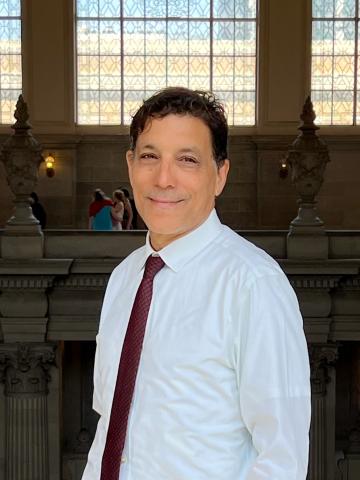 Gregoratos interned for PLS in 1997 while attending law school. He became a PLS attorney in 1999 and was appointed its Director in 2008.

As PLS Director, Gregoratos manages a staff of three plus additional law school interns who advocate for and work to protect the rights of incarcerated persons.

Gregoratos and PLS help justice-involved people in myriad ways. This includes filing court actions separate from an individual's current charges, registering incarcerated people who are eligible to vote, and dealing with out-of-county warrants. PLS directs people in custody to information and community-based resources, which may assist individuals with preserving their housing, and managing child custody and support matters. PLS also provides referrals to human services agencies, supporting the needs of returning residents.

As a young man, Gregoratos struggled with addiction and served time in the old San Bruno jail. In 1987, after the birth of his first son, he got clean and sober and turned his life around while attending Massachusetts Bay Community College.

Gregoratos is inspired to help people in the criminal justice system change, returning the help he received when he was in need. He serves on the Board of San Francisco-based Alcoholics Rehabilitation Association House First Step Home and is Trustee-at-Large for the California Alpine Club’s Echo Lodge in El Dorado County.

He and his wife are parents to three sons and grandparents to twins. Gregoratos enjoys the outdoors, spending time with his family and remodeling houses.