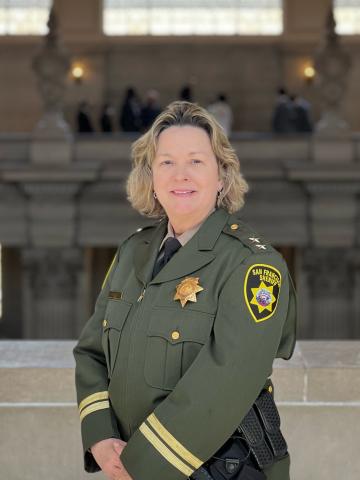 Michele Fisher joined the San Francisco Sheriff’s Office in 1993. She has held the rank of Deputy, Sergeant, Lieutenant, and Captain. Sheriff Vicki Hennessy promoted Fisher to Chief Deputy on June 29, 2019, where she oversaw the Planning & Projects Division.

Chief Fisher has worked in every jail and in three divisions including Custody, Administration & Programs, and Planning & Projects. She is an advocate both in and out of the Sheriff’s Office for LGBTQIA issues.

Chief Fisher served on the committee that developed one of the nation’s first policies and procedures addressing incarcerated TGN people. In 2018, the San Francisco Sheriff’s Office implemented policies and procedures to ensure that incarcerated TGN people feel protected, respected, and have full access to the County Jail’s educational, vocational, recovery and life skills classes and services.

Chief Fisher has taught CORE and Advanced Officer Training classes since 1995. She serves as a subject matter expert on mental health and gender awareness and has served on a number of panels. Chief Fisher is active in her community as a volunteer gardener for the San Francisco Recreation and Parks Department and supports a number of charitable organizations.