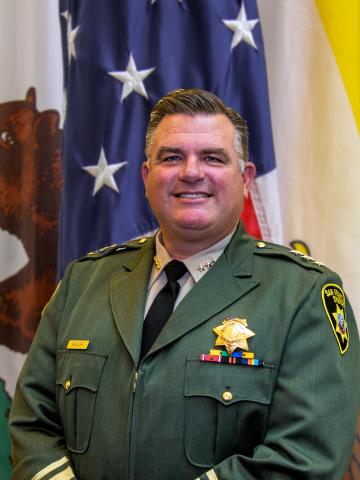 Undersheriff Joseph Engler has been a law enforcement officer serving the people of the City and County of San Francisco since 1992.

He joined the Sheriff’s Office in June of 2020 as Assistant Sheriff after 28 years  with the San Francisco Police Department where he most recently served as Captain of Northern Station. On January 11, 2021, Sheriff Paul Miyamoto promoted Engler to Undersheriff as his second in command.

Mission critical responsibilities under the command of Undersheriff Engler are spread across all divisions. They include administration of three detention facilities and responsibility for safeguarding critical infrastructure: City Hall, three Superior Court buildings; two City hospitals with nine satellite medical clinics, San Francisco Public Utilities headquarters; and the Office of the Chief Medical Examiner. Vital operations also include emergency communications and planning; enforcement of civil orders; and support for justice-involved people during detention and throughout reentry.

Undersheriff Engler is a graduate of the University of California at Davis and San Francisco Law School. His commitment to building and sustaining community partnerships and promoting criminal justice reform and education make him a strong and respected voice among multiple communities of interest. As a 28-year San Francisco Police Department veteran, his public safety experience in command, investigations and strategic thinking has helped the Sheriff’s Office grow and meet new, complex challenges.

Undersheriff Engler is a member of the Administration of Justice faculty at the City College of San Francisco. He is married and the father of four children.