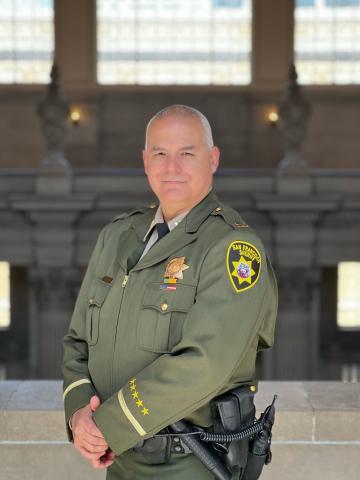 Captain John Garcia Jr. first joined the San Francisco Sheriff’s Office as a Cadet in 1993 and then was hired as a Deputy in 1995. After steadily rising through the ranks, he was promoted to Captain in 2022. He was initially assigned to County Jail #2 and now serves as Facility Commander at County Jail #3.

Captain Garcia previously worked at the old Intake Center at the Hall of Justice, the old County Jail #3, the former County Jail #7 as well as County Jail #4 at the HOJ. He also led the Civil Unit for nine years before taking over the Professional Standards Unit for three years. Additionally, he was a DT/Impact Weapons Instructor and a Special Response Team member. He currently serves in the Emergency Services Unit.  He is a subject matter expert in civil enforcement and was a California State Civil Committee member and basic civil instructor for the state.

He is married with two children and two stepchildren. In his spare time, he enjoys working on and driving his classic cars and attending car shows.